Follow the money three words that form an economic labyrinth and have the potential to destroy the world.


Actually those words create an economic maze not a labyrinth.

The Western economic model of working mainly for money to have lots of things and to eventually retire is flawed.

So too is the social concept that having more is better.

The combination of these flaws have hurt the environment…perhaps badly…not to mention our social order.

Now the entire concept is falling apart because bigger is not better.

Correcting this will create some fortunes for those who see ahead.

Environmental investing is one area that is and will continue to prosper.

Shifting China and the US to European/Japanese conceptual models of “smaller is better” will help as well.

A July 7, 2008 USA Today article entitled “New cars will skimp on fuel but not on amenities” by Sharon Silke Carty gives an example when it says: “Automakers are working as fast as they can to meet a new consumer landscape: Buyers want not just fuel-efficient cars but also the same amenities they had in their hulking SUVs.

“It’s a change from how most cars have been set up in the USA.

“If gas prices stay high and demand remains strong for smaller engines, auto executives say the U.S. market will start looking more like Europe’s, where what is considered a small car here is seen as a family sedan.

“People are starting to look at their four-cylinder cars like they did their luxury cars, with leather seats and creature comforts,” says Mike DiGiovanni, General Motors’ executive director of global market analysis. ‘Think about this: The price of fuel in Europe is $7 a gallon, and the industry has survived nicely with smaller vehicles that are loaded up.'”

Automakers that shift fastest to this euro model will clean up.

One way to prosper is to look at how crowded Europe and even more crowded Japan deal with the different supply and demand. The US, Canada, Australia and China all have learned to squander having huge natural resources and space.

However there is another flaw in the relation to work, fulfillment and living. The idea of having the biggest house on the bloc and “he who has the most toys wins” isn’t working so well anymore.

Bonsai is an example, a Chinese invention that became big in Japan…perfect for limited resources and space.

The Japanese rock or Zen garden, often small, containing sand, gravel, rocks, and occasionally grass and/or other natural elements, with the sea symbolized not by water but by sand raked in patterns that suggest rippling water. Compare this with the large water consuming grass lawn requiring plenty of gasoline to mow.

The Japanese tea ceremony is another…lots of pleasure from limited resource expenditure.

Global shifts in resource supply and demand are creating new lifestyles via economic crisis that will bring a post consumer society.

This shift will be easier than most realize because it is human nature to feel best when working with a sense of purpose. Current shifts are so profound that societies will have to live more purposeful lives.

We try to watch for, adapt to and reflect these shifts in everything we do in our work, play, business and social interactions.

Yet it is not always easy to change after 61 years of doing things one way!

This is why we are busy here at the farm making a number of changes. One was to enhance our labyrinth.

The history of labyrinths dates back into the mists of time, but their religious and spiritual aspects became most noted during the twelfth and thirteenth centuries when many Christian gothic cathedrals installed them in England, Italy and France.

Labyrinths help connect the spiritual side of consciousness in a physical way.

Walking or tracing a labyrinth unites the physical with the spiritual. It brings the inner spiritual life into the outer physical world. We operate in a more holistic way when these inner and outer worlds are united.

Labyrinths represent an easy to follow series of twists and turns from the outer to the inner and back..200% of life, in spirit and material wealth.

Environmentally speaking, labyrinths are great places for exercise as well. They provide the longest amount of walking in the smallest possible space.

We have had a seven circuit classic labyrinth carved in one of our upper, hidden meadows for a numbers of years, but it had grown a bit worn and the meadow overgrown

So Richard and I jumped in my 22 year old Suzuki Samari and headed to the meadow. 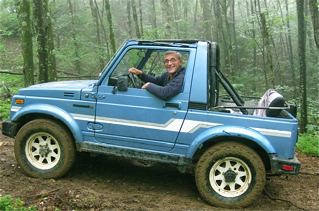 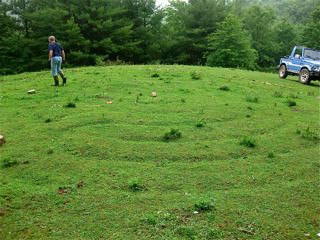 Then we called our friend of decades, Chuck Hunner, a master labyrinth builder who had laid out this labyrinth in the first place.

Chuck drove up from his home in Asheville and the three of us enhanced this labyrinth…a lot…including with another good and essential friend John (Deere) putting a heavy stelae in the center. 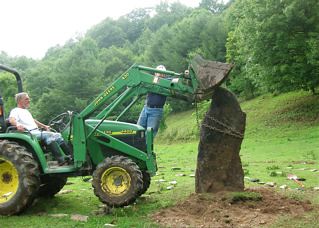 The labyrinth is beginning to look better!

You can see the entire process and many pictures of our Merrily Farms Labyrinth being created in Chuck’s Labyrinth Journal.

Chuck is a craftsman with 38 years of experience making art with his hands. For the last 10 years he’s made labyrinths.

His ‘career’ in labyrinth making started when Richard Anderson taught him to
scratch the labyrinth pattern on the beach. The first time Chuck walked into
the pattern he immediately felt the same effect that 15 minutes of deep
meditation gave him.

He makes labyrinths because he knows that they can influence the way people think and feel…this has been for hundreds of years. Walking a labyrinth automatically balances and enhances the way we think. Labyrinth walkers report feeling calm, clear headed and focused. Some experience a catharsis moving old emotions out so that they can see new solutions to the confines of their past. Breakthroughs are almost automatic.

Chuck says he loves labyrinths because they free up his own creative process. A long walk in this small space gets the creative juices flowing and allows new ideas to bubble up into awareness. Ideas come and make life better.

There is huge change coming. The change is good. Understanding and adapting to it can help bring profits and help make life better as well.

Join us and stay at our farm. Enjoy the mountain cool and summer views as you learn.

Or sit at our waterfall. 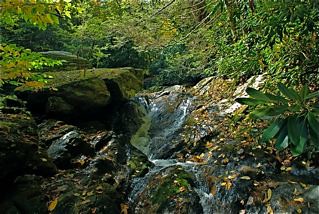 Walk the labyrinth with us during Susan Rotman’s business intuition course.

Or walk the Labyrinth during the splendor of the Blue Ridge leaf change as you learn at our October 3-5, International Business and Investing Made EZ North Carlolina Course.
Labyrinths…lots of walk…little space…uniting the mind, body and emotion. They are springing up all over the US …another sign of how the Western world is changing.

You can see many permanent labyrinths in hospitals, churches and schools near you. Chuck Hunner has helped create many. Try a long walk in a small space.

Labyrinths are another sign of how Western concepts are changing.

Here is a list of Labyrinths that Chuck as worked on in the past few years.

See pictures of these labyrinths