Investing in trains takes an interesting twist because investing in change is like driving a car. The faster it goes, the less you want to be focusing on what’s behind.

Yet the time space continuum is curved.  Sometimes looking far enough ahead, pictures what was behind…because the past becomes the future and this may be the case with investing in trains.

I was thinking this as we sped north, my mind lulled by the clickity clack.  Thoughts drifted back 55 years to the last trolley ride to Oaks Park.

Fred Morris, president of the Oregon Water Power and Railway Company, invested a hundred thousand dollars to develop the forty-four-acre amusement park on the banks of the Willamette River in In 1905.  Trolley companies occasionally built amusement parks at the end of their lines to increase ticket sales.  Oaks Amusement Park officially opened on May 30, 1905, and is still a success almost 100 years later. 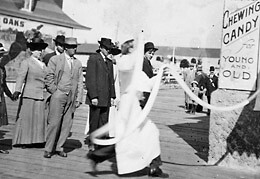 and the trolley that took people there. 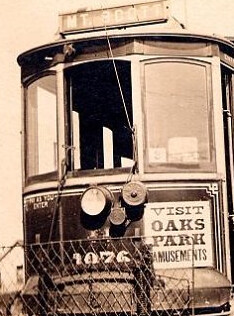 The park has lasted. The trolley that helped form its creation has not.

My dad loved the trolleys in Portland and was saddened by their demise so he took me to ride that last trolley ride on on its the last journey which was to Oaks Park, somewhere around the mid 1950s.

Though I have travelled all over Europe and regularly commuted from Gloucestershire to London on the train, that trolley ride was my one and only train trip in the US…until now.

My second American train journey set me thinking about investing in trains and real estate around them. I’ll expand.

First, let me describe the trip.

Merri and I visited my mom in Portland for her 85th birthday (way to go mom!), plus enjoyed playing with our grandson and granddaughter.  Then we wanted to head north to Seattle to visit with our very good friends there.

One way economy air fares ran from $80 to $140.  Check-in, security and flight, plus getting from Sea Tac airport into Seattle central would gobble up about three hours.

The alternative 173 mile drive would take about three hours as well, $30 of gas plus the one way cost of renting a car and drop off fee…plus the nightmare of driving in two busy cities…after living such a quiet life up here in the mountains.

But Merri had been dwelling on an idea. “Let’s try the train,” she said.

The schedule was good, departing just past noon and arriving about three hours later.  The lowest one way fare was the least expensive of alternatives by far, only $18.00 each.   Our two reserved business class seats ran the price for two up to $79…but let’s spring for it!!!

After a 30 minute drive from Gresham, our kids left us at Portland Union Train Station on NW Sixth.  Nice…a romantic, turn of the century affair with a grand clock tower.  The station is on the National Historic register and was renovated in 1996, its 100th Anniversary.   Here is a drawing of the station.

Plus I could carry on as many bottles of water as I desired.  Nothing had to go into plastic bags!

Plus there are names.  We could choose between the Cascades (which we took) or the Starlight.

A schedule check of US trains show wonderful names that add a touch of excitement to the trip…the Adirondak (New York to Montreal)…the Carolinian & Piedmont  and Silver Service      (New York – Raleigh NC)…and the California Zephyr (Chicago to San Francisco).

These names of eras past add some allure back into travel. How long has it been since airlines like Pan Am gave their flights names like the Honolulu, Pacific and Yankee Clipper?

Finally, there was the train itself…that gut rumbling incredible power…a sense of weight, gravity and strength, all bulked into the engine.  Walking the platform past the grumbling engines gives a man-machine intimacy that one misses when boarding commercial air craft.

The track even has a mystic feel…this metal tread winding to wherever you want to go…an avenue to adventure perhaps.

So we were pleased when we sat down in our roomy, pleasant, comfortable, clean seats…no seat belts required…thank you very much.  And we were pleased to not have the scramble and the confusion of all the tracks and all the trains we’ve caught all these years in Europe.

We were even more pleased when the second hand of my watch reached the 12:15 departure time and the train began to slowly crawl out of the station.  “Ah, Swiss precision without all the bother, ” I said.

For the next three comfortable hours we enjoyed scenic beauty, forest…the Columbia River and up into Puget Sound.

Quiet cars..where people are not allowed to babble cell phone business for all to hear, is a nice touch.  Calling the dining car a “bistro” was a bit of a stretch and a shame…dining cars in the past were good and deserve a place!  The food was okay…better than peanuts, crackers and such served in the air…though it is not cheap nor free.  (We had sort of dreamed of a real dining car like in Europe, but alas not to be.)

First, an economic thought about trains, I’m betting that train travel will enjoy a come back.  I am not disillusioned by our one good trip either.  Amtrac has huge faults, and the era of the railroad is long past its prime.

Plus boomers are about to have more time. They are more likely to to take the slower, but more enjoyable and often less expensive train.

Investments in companies that provide train parts and/or services may also make sense.  This will take more looking into. I am not much of a train buff nor knowledgeable in this field (yet) so if you have suggestions or ideas…let me know.

Second economic thought about trains.  There will be expansions of train service.  Look for ways that this may affect values to property where new stations may be added.  Merri and I, for example, hold property near the train track south of Atlanta where a commuter line station addition will increase property values there.

Third economic thought about trains.  Come to our October 3-5 International Business and Investing Made EZ Course on the train!

Views during the leaf change may be spectacular.

Plus you may save considerably on fares.

Investing in trains may be a case where the past becomes part of the future.  Whether it’s the Starlight Express or California Zephyr trains may be back on track. Watch for opportunity coming down the line.

Until next message, may all your travel be good.

Our next International Investing and Business Made EZ Course in North Carolina is October 3-5, 2008 in West Jefferson.  The nearest airport and train stations are Greensboro and Charlotte, NC.