Yesterday’s message about Cotacachi activity mentioned how several of the village elders approached Merri and me with a plan to help integrate the growing band of readers moving to Cotacachi…(there must be 40 or 50 families who have purchased property in Cotacachi) into the community.

Their suggestion was that we participate in the local Cotacachi football (soccer) competition between the local villages.

At the end of the playoffs the wining Cotacachi football team gets a grand prize of two bulls.

The runner up gets one bull…third place gets a calf and fourth place a pig.

This is a big Cotacachi football deal.  It was suggested that the Americans, Canadians and Europeans donate first prize…and attend the games.

One the first day of the competition, all the teams arrived…there is a festival of sorts and several competitions. Each village has a queen.  From these, a selection of the Cotacachi Cup Queen is made.

Plus there is a best uniform competition.

The games begin with a procession of the teams.  Here they come. 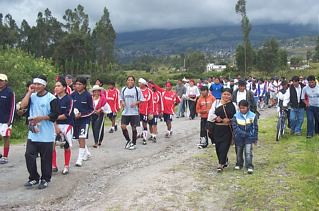 One of our friends, Patricia McCormick is a Canadian real estate broker, who upon retiring moved to Cotacachi for three months to change gears.  She took these photos below and wrote:

“This was a delightful day — the Queen had to be chosen from the 5 Princesses of their teams.  I was on the panel of five judges; I was the judge representing Canada; there were 5 of us altogether and it was unanimous that we all agreed on the Number 1, 2, and 3 that were chosen.
“I loved the parade as they came in, and in particular the band.  The sweetness of the people was so touching.  We all enjoyed the simplicity and joy as the indigenous people and the rest of us joined together in the festivities.

“The first and second prize for the season will be bulls, donated by Merri and Gary Scott.  It was a very special day, ending with an ice-cream cone — enjoy the pictures.”

Here is Patricia with the tournament organizer, Sr. Bonilla. 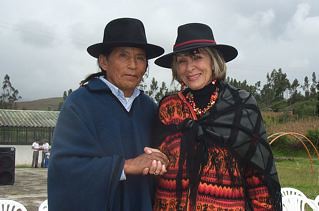 Then the queen was chosen. It had been suggested that to enhance the unity that the five judges be one Indigenous, one American, one Canadian, one Mestizo and one European.  Patricia represented Canada. Steve, our man in Ecuador, was the European and our friend, Deborah Nance the American, the talented artist Diana Carasca and Sr. Bonilla the, organizer of the tournament.

Each of the village queens spoke on why she should be queen.

Each was dressed in their local tradition.

I had the privilege of pinning the queen’s ribbon! 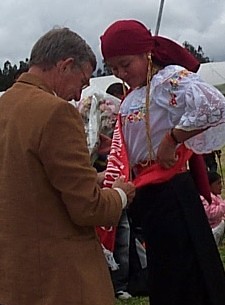 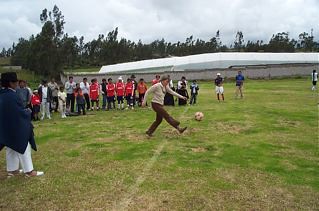 and Steve kicked out the first balls. 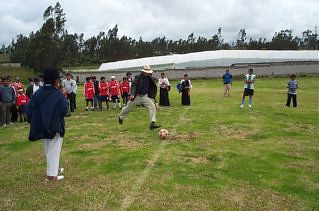 After the announcements, Merri and I enjoyed chatting with Sr. Bonilla.and then we left the footballers to it! 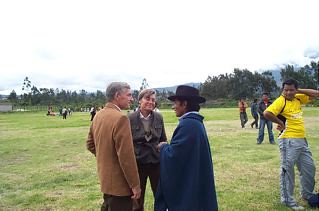 Plus, of course, there was the ice cream! 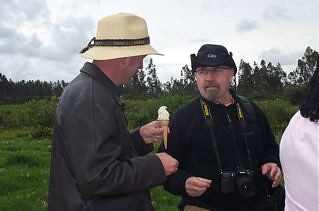 American Writers and Artists Inc. were conducting their Ecuador Photography & Spanish Immersion Expedition with us so their group came along for some photo ops…and ice cream.  Here is photography instructor, Rich Wagner, with Steve.

There will be many games in the tournament over the months ahead.

We’ll be there for the grand playoffs and to present the medals and the first prize bulls. That’s no bull for sure.

This is why Cotacachi is such a delight…so much going on from Ecuador parades…to music and dance…to football.

We hope to enjoy delights with you in Cotacachi or in North Carolina’s Blue Ridge soon.