Cotacachi is in the news again this time in an article entitled “Living the high life in Ecuador Sierra region’s charms include vibrant Quito and a volcanic lake” by K.C. Summers.

This appeared in the Washington and Denver post…maybe more. Writers are always so astounded by Cotacachi. This of course is not news to me and should not be news to you if you have been reading this site for long.

Here is one of the any markets near Cotacachi. 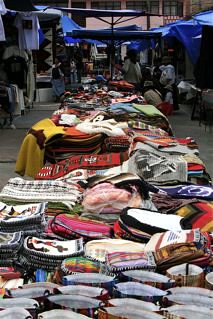 Cotacachi, Otavalo, this entire area in the Imbabura province is wonderful. 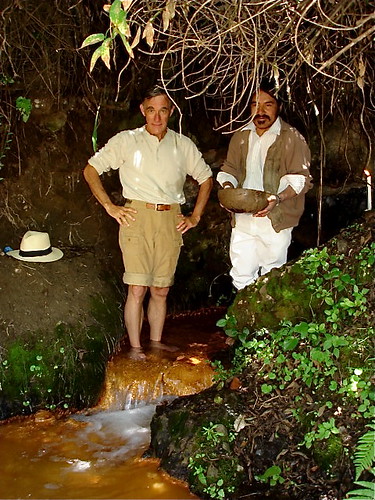 This article covered much about Ecuador but zeroed in on Cotacachi and surrounds when it explained that the author knew she would find great crafts and luxury trappings at low prices. Then she went on to say that she got a lot more than we bargained for. 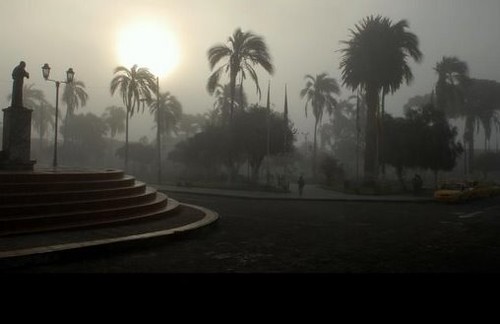 Here is the portion of the news article that looks at Cotacachi.

“For such a small country (about the size of Colorado), Ecuador is remarkably diverse. Tucked between Colombia and Peru on South America’s west coast, it’s probably best known as the gateway to the Galapagos Islands. But it has three other ecosystems: the Amazon, the Pacific coast and the Andes, or Sierra, each with its own distinct climate, terrain and culture.

“It was the Andes that captured our attention. Running half the length of the country, the mountains are home to a dramatic avenue of volcanoes (including Cotopaxi, the highest active volcano in the world), deep valleys, lakes and farmland, not to mention the grand old haciendas we hoped to stay in.

“The haciendas, also called hosterias, were established during the country’s Spanish colonization, when they were awarded as land grants by the king. As the estates flourished, their wealthy owners incorporated ornate tile work, terra cotta roofs, archways, verandas, murals and central courtyards into their designs. After the land reforms of the 1960s many of the haciendas were broken up, refurbished and turned into inns, some with spas and activities such as horseback riding, mountain biking and hiking. Popular with Ecuadoreans, they’re just beginning to be discovered by Americans.

“We found treasures that were far more affordable the next day at Otavalo, an hour and a half north via the Pan-American Highway, the region’s main north-south route. The largest and most important market in the country, if not the continent, it draws visitors every day of the week, but Saturday’s the biggie.

“It was dizzying. And paralyzing. Picture an entire town taken over by market stalls: block after block of textiles, jewelry, masks, leather goods, hats, paintings, ceramics, food, clothing and more … with Andean pipe music playing, vendors shouting, shoppers pushing, produce smelling. All we could do was plunge in.

“We strolled, we pointed, we bargained. Two subtly dyed cotton scarves for $12 seemed plenty cheap to me, but it was a thrill to get them for $10, and the young Andean woman selling them looked happy, too. By the end of the afternoon, I’d accumulated six tagua and seed necklaces ($30), two delicately embroidered baby dresses ($8), two straw-and- leather handbags ($28) and — my best deal by far — an enormous multicolored woven tablecloth for $10.

“Tip No. 2: Bring lots of tote bags to carry your stuff home.

“We hired a driver and set out for the nearby towns of Agato, San Antonio and Cotacachi for, respectively, textiles, woodcarvings and leather. At the home and workshop of a local weaver, an elderly woman demonstrated the craft for us. She spoke no English, but we didn’t need words to comprehend the complexity of her task as she combed the rough wool and turned it into yarn. Then we took the obligatory turn through the shop, where, inspired by the grace of the indigenous women I’d been observing, I bought a black shawl for $45. So worth it.

“We hit the jackpot again in Cotacachi, a town with more leather stores than I have ever seen in one place. Adele scored a black jacket for $60, her great find of the trip. I might have bought a purse or two, I forget.”

Expect to see more about Ecuador and Cotacachi in the news.This area is catching on and we hope to see you here.

Join us in Cotacachi!

Here is that volcanic lake above Cotacachi. 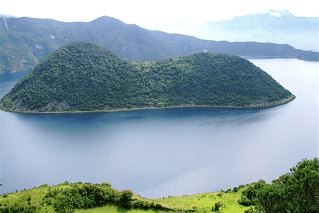