Why be a multi currency investor?

The answer to this question creates fortunes. Yet this same answer also ruins the purchasing power of millions of investors as well.

For example see below how to earn 17.15% per annum on General Electric bonds.

I know because I have been cashing in on this same problem for four decades.

Next month is Merri’s and my 40th anniversary of living and investing abroad.

The roots of our success and the basis of our multi currency courses began May 5, 1971.

I had been traveling since 1968 throughout Asia, an investment advisor helping Asians invest in the US.

I entered Singapore on May 5, 1971 with a seven day visa May 12, 1971. Little did I know that this was the week that would change the world as I booked into the Raffles colonial hotel. 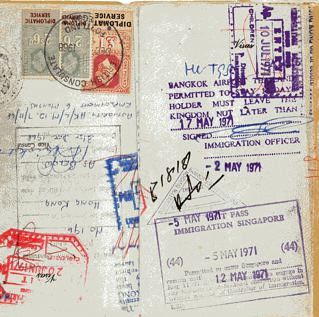 The Raffles back then offered a great outdoor restaurant just next to the Long Bar (home of the Singapore Sling). There was something comfortable in the old fashioned pots of thick cut marmalade and slightly burnt toast that stood in racks of sterling silver. This elegant setting and the quiet service was an easy, wonderful way to start the day. I felt in place, relaxed and comfortable, part of an ancient tradition, the modern link in a rite that this hotel had offered for so many generations past. I sat back feeling that all was well. I felt in control and on top of that modern era.

As an American at that time I traveled only with dollars. From centuries past, history had seemingly supported my financial well being up to that very moment. Britain’s colonial days leading to the emergence of America, the World Wars, modern technology, Yankee know-how, puritan work ethics and unbounded natural resources had all worked on my behalf to form the greatest economy recorded time had ever known.

This history had created a world economy vastly dominated by the United States of America. Forces, building before and throughout the twentieth century, lead to incredible economic power within the United States. This domination made the U.S. Dollar the bastion of global currencies and made it the reserve currency of the world.

Yet suddenly when the dollar devalued, money changers would not take the greenback. I couldn’t pay for my hotel. I couldn’t even pay for breakfast and I was 12,000 miles from home. Was I ever scared!

Since that day I have never trusted the US dollar or any other single currency. This has reaped rich rewards. Betting against the US dollar (as I have again and again over these three and a half decades) has been exactly the right thing to do. As the chart below shows the greenback has lost about 75% of its value against other major currencies.

The US dollar has fallen for almost 40 years. 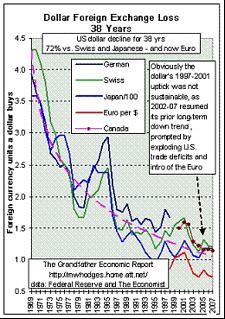 A falling US dollar destroys the purchasing power of Americas and destabilizes currencies everywhere. In addition, the British pound WILL fall as well.

Rarely am I so bold to say that any currency WILL rise or fall. We always live and invest with the unknown. Yet I am confident. The dollar and sterling will fall.

The answer is simple. Years ago, US and British banks went on a wild sending spree. Now trillions of dollars worth of loans are in default. Quite simply this money is gone. Where did t go? In valuable real estate that is now not so valuable.

US and British banks are in ruin and to stop a total melt down the Federal Reserve bank and the Bank of England are lending the banks hundreds of billions of dollars.

Recently the Bank of England alone injected 50 billion British pounds into the UK banking system due to liquidity problems in the mortgage market. Reports suggest that it may need to provide another 100 billion pounds. That is over 300 billion dollars for the British economy which is much smaller than the US.

Where will the money the British and US systems lend come from?

From government borrowing that will not be able to be repaid…unless the currencies devalue.

In summary. Expect the US dollar and the British pound to stumble and fall against other currencies.

To gain wealth in terms of dollars and pounds all one as to do is invest in other currencies.

What currencies should an investor hold?

The answer to this question is one that can create fortunes or can ruin an investors financial well being.

What kinds of investments in other currencies should be made?

At times the best investments are in cash…other times bonds or shares and often property.

Confusing? It is at times.

This is why I, with the aid of Jyske Bank, currently offer economic updates at our International Business and Investing Made EZ courses.

Jyske Bank is the second largest Danish bank with 450,000 domestic clients, 35,000 international clients, USD 23 Billion in total assets, and a Moody’s rating of AA1. Jyske has over 35 years’ specialization in private banking. Denmark is ranked by Moody’s as one of the safest country in the world to have bank accounts.

Yet there is more…Jyske is one of the leading currency traders in the world as well.

Most major banks have divisions that trade currencies. However most only trade during their eight office hours a day. Then they turn over their positions to one of the few 24 hour trading banks. Jyske is one of these banks.

This does not mean you should trade currencies at Jyske Bank.

Multi currency investing is not high leveraged speculating in the ups and downs of currency parity shifts.

Multi currency investing is conservative, diversified investing for the medium and long term in CDS, stocks and bonds denominated in more than one currency.

May I repeat this.

Multi currency investing is conservative, diversified investing for the medium and long term in CDS, stocks and bonds denominated in more than one currency.

I do most of my multi currency investing with Jyske Bank.

As mentioned above, Jyske Bank is about as safe as banking can be..well rated in a safe stable country…with plenty of capital and a century of experience.

More importantly Jyske has a good system to help investors choose good stocks and bonds. The bank uses a good value system to select multi currency equities. This system works s well that their affiliated fund management company has been rated #1 by Morningstar. They use this value system to help us select Multi-Currency investments.

Having the banks support provides access to data and expert advice that would otherwise be unimaginable to attain.

Here I am speaking with a panel of global investment experts at a recent Jyske Bank seminar. This is an incredibly sharp team!

Take general Electric bonds as an example of Jyske Bank’s ability to sniff out good deals in bonds. The bank recognized General Electric enjoys the highest rating (AAA) with both Moody’s and S&P. However in reality GE bonds are trading as an AA-rated company due to the financial crisis which has caused the credit spreads of all corporate bonds to widen.

The bank warns investors that they take on a higher credit risk by buying
General Electric issues instead of government backed bonds… but the GE bonds pay 1% to 1.5% higher yield.

This is just one of a selection of bonds denominated in Turkish lira that yield 16% to 17%.

To gain this yield one also assumes a currency risk which we will view in tomorrow’s message.

Now let’s look at a good value shares that Jyske Bank has spotted.

The first is Vestas Wind Systems. This high risk investment is denominated in Danish kroner. The price now is 512 DKR per share. Jyske’s target price is 610 DKR and the Danish kroner may appreciate against the dollar as well.

Vestas is the world’s largest wind turbine manufacture. They create a product the world needs badly! The company enjoys good market conditions with a strong demand which results in higher prices and better contractual conditions. Plus the company has improved its systems so they contribute to higher profitability.

Vestas is part of the Green portfolio that we created with Jyske Bank’s help in 2007. It rose 263.6% in its first year. This portfolio has not been immune from the 2008 turmoil. Vestas shares have dropped, but since the demand for wind power as not…these shares offer special value now.

Learn why and how to know more about multi currency investing.

Here is Thomas Fischer of Jyske Bank talking at one of my recent Multi Currency courses. 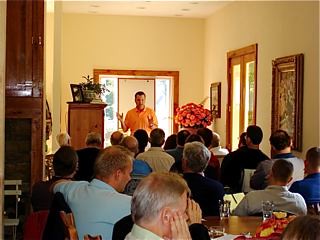 You can get more information on multi currency investments Jyske Bank from Thomas Fischer, Senior Vice President at fischer@jgam.com

Even better you can meet me and Thomas at our next International Investments and Business Course. See details here.