Yesterday’s message looked at the freedom we can gain in our lifestyle with our own freedom lifestyle internet business.

Your lifestyle can provide you freedom to work where you choose.

Here is one of my favorite work places in Bahia. 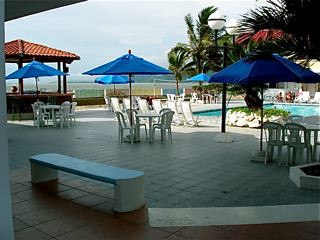 Yesterday’s message shared two “secret slingshot” words: focus and niche.  These can bring you a lifestyle that really is free.

There are more secret lifestyle words you need in your business…the third slingshot word is “free.”

Here I am working at our Ecuador beach home. 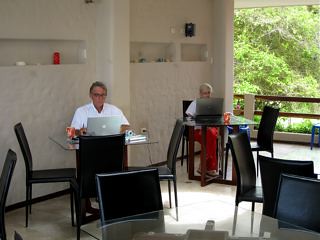 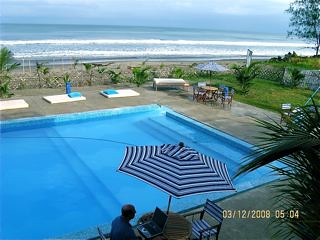 Note one of our friends also enjoying his freedom lifestyle working by the Ecuador beach pool.
Yesterday’s message showed how we outranked the New York Stock Exchange and other behemoths at Google.  But what good though are these rankings  if it does not bring in business and create income?

One way to develop focused niche clients is to offer something focused and free.

For example our rankings with phrases like “emerging stock markets” leads to an offer of a free report on how to invest in international currencies.

Here is what one reader that came in via the search engines just wrote two days ago:

“Heya Gary,  I wanted to say your International Currencies Made EZ course is
outstanding!!! I now finally understand how money flows. I’ve been reading the chapters all day. I’ve learned so much that I wouldn’t have picked up on my own..

“See the thing is I decided I need to make some major changes in my life. Im 28, in debt, dead end jobs. I want to get more out of life. I’ve always been interested in Investing, Ive just never understood the basics or the terms.

“And the courses you’ve written are fantabulous – If I may say sol!. Much more relevant than anything I learned in college. Thanks for taking the time to put these courses together and online. I have a plan to learn as much as I can about foreign investing. I don’t know of any other way to get started in investing besides getting an economics/finance degree?

“Do you know of any good websites/articles. I would gladly pay for an article/ebook. I know a lot of my friends would as well.   Best wishes and rays in Ecuador.”

Guess what? Of course I know a good website and article.  I immediately offered this new reader (who came from the search engines) our multi currency portfolios course.
Here is Merri’s and my Cotacachi office were we can work outdoors. 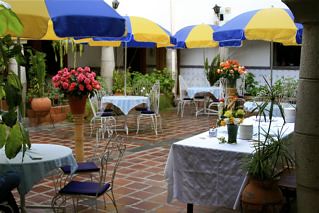 Working hard with friends in the sun. 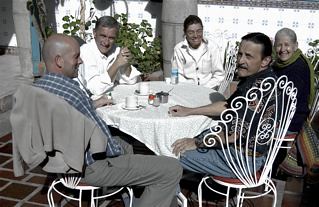 An article by Chris Anderson in the March 2008 issue of Wired focuses on the importance of FREE.  The article is entitled  “How To Make Money Around Free Content.”

The article begins:  “At the age of 40, King Gillette was a frustrated inventor, a bitter anticapitalist, and a salesman of cork-lined bottle caps. It was 1895, and despite ideas, energy, and wealthy parents, he had little to show for his work. He blamed the evils of market competition. Indeed, the previous year he had published a book, The Human Drift, which argued that all industry should be taken over by a single corporation owned by the public and that millions of Americans should live in a giant city called Metropolis powered by Niagara Falls. His boss at the bottle cap company, meanwhile, had just one piece of advice: Invent something people use and throw away.

“One day, while he was shaving with a straight razor that was so worn it could no longer be sharpened, the idea came to him. What if the blade could be made of a thin metal strip? Rather than spending time maintaining the blades, men could simply discard them when they became dull.

“A few years of metallurgy experimentation later, the disposable-blade safety razor was born. But it didn’t take off immediately. In its first year, 1903, Gillette sold a total of 51 razors and 168 blades.

“Over the next two decades, he tried every marketing gimmick he could think of. He put his own face on the package, making him both legendary and, some people believed, fictional. He sold millions of razors to the Army at a steep discount, hoping the habits soldiers developed at war would carry over to peacetime. He sold razors in bulk to banks so they could give them away with new deposits (“shave and save” campaigns). Razors were bundled with everything from Wrigley’s gum to packets of coffee, tea, spices, and marshmallows. The freebies helped to sell those products, but the tactic helped Gillette even more. By giving away the razors, which were useless by themselves, he was creating demand for disposable blades. A few billion blades later, this business model is now the foundation of entire industries: Give away the cell phone, sell the monthly plan; make the videogame console cheap and sell expensive games; install fancy coffeemakers in offices at no charge so you can sell managers expensive coffee sachets.”

This article explains that thanks to Gillette, the idea that you can make money by giving something away is no longer radical.

Then Anderson points out that a different sort of free is emerging. The new model is based on the fact that the cost of products is falling so fast the last debates over free versus pay online are ending. In 2007 The New York Times went free; this year, so will much of The Wall Street Journal.

The article shows that information wants to be free and also wants to be expensive and that businesses will thrive on this model.

For example low-cost digital distribution will make summer blockbuster movies free. Theaters will make their money from concessions — and by selling a premium moviegoing experience at a high price.

The Web has become the Land of the Free.  Free leads to the fourth secret word for creating a lifestyle of freedom. Watch for this fourth secret slingshot word in an upcoming message.

Our International Business and Investing Made EZ courses focus on helping delegates attain freedom lifestyles in two ways…though having their own global business and…with seven types of global investing.

See more on the importance of global investing in tomorrow’s message.

Join us with Thomas Fischer of Jyske Bank in North Carolina. 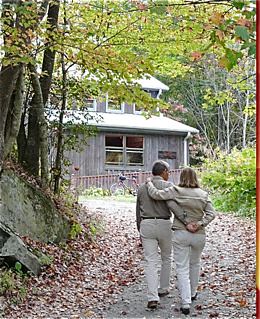 We walk our talk. Our courses are based on 40 years of experience in
international business and investing.

See our freedom lifestyle as you learn!