On the health secret side, a recent message for example, looked at the importance of essential oils for good health. Yet most of the Western medical establishment do not acknowledge this at all.

Another message looked at the health benefits of Aloe Vera – Flaxseed tea for a Cotacachi health breakfast. Don’t expect this at McDonalds soon.

However, it’s hard to fly in the face of common wisdom…difficult to ignore the thundering herd. Multi currency investing requires emotional strength and mental flexibility when economic logic suggests we act on total unfamiliar ideas.

Many readers expressed this fact when recent messages at this site suggested that we borrow US dollars to invest in Russia.

Now it’s time to go even beyond Russia…invest in Kazakhstan.

This idea has come from Jyske Bank at our last International Investment course If you grew up thinking as I did, your immediate reactions might be, “What?” Or “Surely you jest”.

Let’s look at the facts.

The Republic of Kazakhstan, is the ninth largest country in the world and is the world’s largest landlocked country. This huge nation has a small population (about 15 million not many more people than geographically tiny Ecuador.

Kazakhstan declared independence in 1991 and there has been significant progress toward developing a market economy partly due to the country’s large oil, gas, and mineral reserves.

Here is a photo of Kazakhstan’s capital city Astana from Wikepedia. 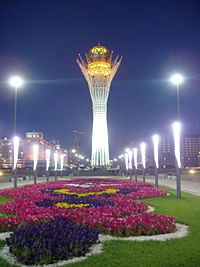 Bank TuranAlem (BTAS) was formed in 1997 as a merger between two government-owned banks, and is the second-largest bank in
Kazakhstan.

The bank’s bonds are rated by Moody’s Ba1 and S&P: BB

Our experience says no…go with something we know like General Motors.

Yet GM’s debt is rated much lower than the bank’s, Caa1 by Moody’s (seven levels below investment grade), and BB by Standard & Poor’s.

Plus GM is not seeing rapid strong growth.

The most recent accounts released by BTAS shows continued rapid growth
EVEN though it has been affected like most financial institutions by the global credit crisis.

You are paid extra for the much safer investment because Kazakhstan is unfamiliar!

The Kazakhstan government has defended the banking sector, and there is no doubt that the major banks, including Bank TuranAlem, can be certain to receive government subsidies, if they should run into problems.

The bank is very profitable and its capitalization is high.

Jyske Bank maintains a BUY recommendation. Considering the increase in income and significant support from the Kazakhstan government, Jyske expects that Bank TuranAlem will make it through the ongoing crisis in the global capital markets.

This is the way we can find value with multi currency investments. These bonds become even more interesting when we realize that we can leverage their purchase with 4.5% US dollar loans. More on this in a upcoming message.

Learn how to be a multi currency investor. See How.
Learn more about Bank TuranAlem bonds from Thomas Fischer at Jyske Bank at fischer@jbpb.dk

Until next message, may you profit by being familiar with unfamiliarity.

Or Join us in Ecuador.